Dysfunction of the Eustachian tube due to obstruction is a pathological condition frequently found in paediatric patients (incidence 1-5%, 40% of children under 10 years of age, even if only temporary) and also in adults [1,2] . Several causes may play a role, amongst which hypertrophy in the adenoids, chronic rhinitis which may be hypertrophic and allergic or vasomotor, recurrent or chronic infections of the upper respiratory tract, pharyngo-laryngeal reflux, changes in the development of the superior maxillary bone, the outcomes of previous surgery in the rhino-pharyngeal area or due to the cleft palate, results of radiotherapy of the rhino-pharynx [3] . The main symptoms, which the patients complain of, are a feeling of auricular pressure, auditory fullness, even reaching severe earache. The most dreaded risks of tubal obstruction, caused by poor ventilation of the middle ear, are the development of chronic otitis with effusion and the possible cholesteatomatous evolution of the inflammation of the middle ear. Medical treatments and thermal steam insufflations have been adopted and are still used with modest results regarding auditory symptoms. Over the years, various tubal surgical techniques have been proposed, however without general consensus regarding their efficacy (transtubal insertion of gold threads, trans-mastoid shunt, Laser tuboplasty), but all of which characterized by the invasiveness of these methods and, above all, by the possible damage to the nasotubal mucosa [4,5,6,7] . The insertion of transtympanic ventilation tubes (grommet) has also been proposed in order to introduce air into the middle ear and stimulate the opening of the tube, even if their efficacy in chronic dysfunction of the tube almost always requires repeated positioning, or leads to the choice of introducing permanent tubes (with the risk of persistent tympanic perforation). A tubodilation technique with a balloon inserted through all the cartilaginous part of tube, by means of a specific micro-endoscope, was recently proposed by Sudhoff [1,8,9] which showed evidence of efficacy, derived from the earlier experience of angioplastic techniques and the positive results obtained with balloon dilation sinuplasty [10,11] . Furthermore, recently, the efficacy of a new form of energy was described which does not produce high temperature damage, so called Molecular Quantic Resonance (MQR), on shrinkage of the lower turbinates [12] . It was, therefore, considered worthwhile describing herewith personal experience gained from a consecutive series of patients presenting an obstructive dysfunction of the Eustachian tube, and treated using a tubo-dilation balloon according to a technique which was further modified based on original description by Sudhoff [1,8,13] and a personal technique based on shrinking the tubal orifice in the rhino-pharynx by means of MQR, in order to evaluate its efficacy and safety.

Following written informed consent and approval of hospital ethical committee, 62 patients (26 female, 36 male) affected by Eustachian tube dysfunction were included in the study, age ranged between 22 and 78 years, mean age 42 years. After investigating patients’ history, a complete clinical ENT examination, oto-functional examination (complete pure tone audiometry with Weber test to confirm conductive hypoacusia, complete impedancemeter, SOTV (Swallowing-Opening-Toynbee-Valsalva) test, were performed in all patients in the study. The criteria for inclusion in the study were simultaneous presence of at least 2 of the following persistent symptoms since at least 12 months:
-pain or pressure/fullness in the ear in altitude and atmospheric pressure changes;
-improvement, even temporary, of the symptoms upon swallowing or the maneuver of compensation;
-perception of noise and auricular crepitation upon compensation maneuvers;
– recurrent subjective hypoacusia; Other diagnostic criteria related to inclusion were at least 2 of the following clinical persistent features since at least 12 months:
– the diagnosis of recurrent catarrhal otitis included audiometry and impedancemetry;
– otoscopic findings of a dull tympanic membrane or of its abnormalities (pockets, sclerosis, excluded perforation);
– immobility of the tympanic membrane however, only after repeated attempts with a Valsalva and Toynbee maneuver, as for tubal stenosis.
In order to be included in the study, the patient was requested, at the audiometric examination, to present conductive hypoacusia over 30 dB, resistant to the therapy given at least 12 months previously. Furthermore, it was also requested to provide impedancemetric findings consistent with retraction or low compliance-blocked tympanic membrane (tympanograms As, B or C).
The impedancemetric examination was performed in all patients, using a tubal function SOTV test in order to seek a movement of the tympanometric pattern alternating between positive and negative values depending upon whether the Valsalva or Toynbee maneuver was performed. The 62 patients were included in the study. 43 cases (69.7%) had bilateral tubal obstructive dysfunction (24 male, 19 female) and 19 cases (30.6%) had monolateral (13 male, 6 female) dysfunction, thus a total of 105 ears presented pathological conditions requiring treatment.
The hearing symptoms (pain/pressure at the variations in pressure, improvement in fullness at the Valsalva maneuver, noises at Valsalva, recurrent subjective hypoacusia) were evaluated using the VAS scale (visual analogue scale) (0-10 an increasing severity min-max) comparing the pre- and post-operative period. A pre- and post-operative comparison was made for all the instrumental parameters.
All patients didn’t find resolution to their symptoms after long term (at least 3 months) repeated medical treatment (oral and intranasal steroids, mucolytic, antihistamine) neither after repeated nasotubal air insufflation (e.g.Politzer).
The patients presenting respiratory allergy, obstructive hypertrophy of the adenoids or hypertrophic rhino- sinusitis with or without nasal polyposis reaching the choana were excluded from the study and sent, when needed, for surgical treatment for the obstructive nasal condition. Any oral or intranasal steroid treatment, mucolytic or antihistamine drugs were prohibited during the study.

Using the trans-nasal approach, under video-endoscopic control with a 3 mm rigid endoscope 45° (Karl Storz, Tuttlingen, Germany) inserted into the nasal fossa on the opposite side to the tube to be dilated, the special tubal balloon catheter (Spiggle & Theis, Overath, Germany) is introduced. This catheter is introduced through a dedicated curved cannula and with an aspiration channel which is supplied with the catheter, and which allows the catheter to pass, thus entering the Eustachian tube. Once the catheter has been correctly and completely introduced for all its length (20 mm) into the cartilaginous part of tube, this is then dilated (3,28 mm diameter) with a physiological solution (NaCl) reaching a pressure of 10 bars (7.501 mmHg) for a time period of 2 minutes using a dedicated pressure pump provided (Spiggle & Theis, Overath, Germany). Once the dilation has been completed, this is deflated and the curved cannule and he catheter are removed without it entering the cannula, all of which performed under endoscopic control at 45° from the opposite nasal fossa, so doing in order to ensure an excellent view of the tubal ostium (rhino-pharyngeal opening), without obstacles in the maneuver which would occur using the same nasal fossa for endoscope and catheter (personal variation of the Sudhoff technique) (Figure 1).
Following tubal dilation, still under video endoscopic control at 45° from the contralateral nasal fossa, decongestion of the torus tubarius (Eustachian cushion) by means of insertion with a DRB handpiece, needle shaped, activated by a Molecular Quantic Resonance (MQR) machine so-called Quantum (Telea, Sandrigo-Vicenza, Italy) for a total of 4-5 seconds at an intensity force of 3.5, with immediate shrinkage of the mucosa and a reduction in the prolapse of the mucosal plica on the tubaric ostium (personal technique, Tubal Ostium Shrinkage-TOS).
Both procedures were performed under intravenous anesthesia, they did not cause any bleeding and did not require insertion of nasal tampons in any of the patients treated.
As far as concerns the anesthesia the TCI (target controlled infusion) technique was used not only to induce, but also to maintain, the anesthetic effect. The pharmaceutical products used for this purpose were Remifentanil and Propofol. No anesthetic premedication was performed. Airway ventilation was guaranteed by pressure controlled mode, and with the use of a laryngeal mask at 90 degrees curve. The patient woke up easily and immediately without post- operative pain. It was not necessary to administer antiemetic drugs in the post-operative phase, in any of the patients.
Data obtained were analysed using the statistical method Student t-test. Statistical differences were considered significant for p<0.05. All data were registered on magnetic support using Microsoft Excel and STATA software. 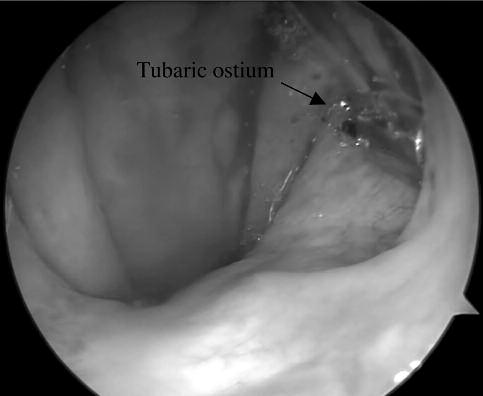 The surgical procedure was found to be easy to perform for a surgeon familiar with endoscopic techniques in a safe, autonomous mode (two hands for the two nostrils) and the absence of bleeding during balloon dilation, as also in the MQR shrinkage of the torus tubarius, offers the possibility to safely follow, under endoscopic vision, the entire procedure.
In particular, the introduction of the angled endoscope into the nasal fossa opposite the operative one, as we previously described, further reduces any possible injury to the mucosa, also in the rotation manever seeking the correct angulation for the tubal entrance which would, in this way, be made easier. For the same reason even septal deviation didn’t represent a limitation to perform the procedure.
Introduction of the fine handpiece to shrink the tubal opening and performing the maneuver under contralateral endoscopic control was found to be particularly simple and immediately efficacious in reducing the mucosa volume, in absolute safety and without side-effects.No intra-operative or post-operative complications occurred either in the rhino-pharynx, or on the tympanic membrane; in particular, it should be emphasized not only that no pain occurred, but also that there was complete absence of bleeding.
In 4 cases, the balloon was damaged even before being inflated (consisting in a hole from which the physiological solution emerged when attempting to blow up the balloon), due to accidentally not having introduced the latter into the tube but instead having twisted it against the torus tubarius which was extremely hypertrophic. This occurrence did not, however, cause either mucosal damage or any other side-effect, but had simply led to the need of a new balloon in order to then finally complete the procedure in the correct way.

The post-operative hearing symptoms were reduced in a statistically significant manner (p<0.05) at VAS (pain/pressure at the variations in pressure, improvement in fullness at the Valsalva maneuver, noises at Valsalva, recurrent subjective hypoacusia). Mean values at VAS of the otological symptoms reported by patients (pre- and post-operatively) showed effectiveness of surgical treatment in solving auditory problem correlated to tubal dysfunction (Table IV).
None of the patients complained of complications or problems during the post-operative period; particularly appreciated by the patients were the absence of pain and bleeding already during the first few hours after the operation.

The associated surgical procedure presented herein was found, to be an efficacious mini-invasive and complete treatment approach of the tubal dysfunction for the majority of treated patients. With a single surgical approach it is, in fact, possible to safely dilate the cartilaginious tract of the tube and reduce the obstruction due to the distal ostium at rhino- pharyngeal level. That brings airflow easier to reach tympanic cavity and solve most of patient’s symptoms. Vision of the surgical field by means of a standard nasal endoscope and not by means of a micro- endoscope as proposed in the original technique of Sudhoff, clearly improves, the quality of vision and makes the technique easier for the endoscopic surgeon. The MQR tubal shrinkage represents the final stage of tubal dilatation when taking into consideration the inflammatory hyperplasia of the rhino-pharyngeal mucosa associates with persistent rhinitis which often involves the torus tubarius which is almost always associated in the conditions of persistent stenosis.
A comparative analysis of our clinical and instrumental results obtained, together with the safety profile of the procedure and absence of adverse effects, would indicate that this is a first-choice candidate in the treatment of persistent tubal dysfunction syndromes associated with stenosis of the latter, particularly if with hyperplasia of the torus tubarius.
The surgical procedure of balloon tubodilation combined with MQR-tubal shrinkage could be used in the next future for treatment of chronic otitis in association with tympanoplasty operations, probably increasing functional and surgical results. Further experiences are needed. The tubal dilation procedure is indeed a modern approach to a never solved problem which afflicts otology for a long time.
In the future, our attention will still be focused on the clinical evaluation at long-term follow-up in these patients and aimed at confirming the stability of the results over time.

Disclaimer: The authors have no financial relationship or conflict of interest with any company