After completing this study, plasma tonsillectomy was adopted for the majority of cases. Benefits of the plasma device include the possibility both to excise tissue and coagulate bleeding vessels using the same device whilst improving quality of post-operative recovery over cold dissection with suture ligatures.

Over the last few years, several different techniques for performing tonsillectomy have been proposed in the attempt to lower the morbidity of this surgery. The cold dissection procedure was the standard approach before the ‘Bovie’ electrocautery device was introduced. Electrosurgical methods offered an improved means over cold dissection for controlling intra-operative bleeding and were rapidly adopted as the procedure of choice. During subsequent years, however, several clinical studies showed that electrosurgical tonsillectomy was associated with more painful and extended post-operative recovery 1-3 as well as an increased risk of secondary bleeding compared to cold dissection 4 5. Hence, new devices and methods for performing tonsillectomy continued to be developed and studied. When radiofrequency-based plasma devices were introduced for tonsillectomy, our hospital still used cold dissection routinely. investigators comparing plasma devices to electrocautery reported that their use was associated with significantly less damage to tissue underlying the treatment zone 6 and potentially better quality post-operative recovery than electrocautery 7-10. The electrocautery technique was never adopted in our unit on account, not only of the residue which remained with this procedure, but also because, with this technique, there was the risk of delaying post-operative recovery of our patients. reports of early research on the plasma device were intriguing and were open to attempting use of a method that, compared with electrocautery, would allow the potential for improved recovery, while providing a mechanism to control intra-operative bleeding without requiring use of sutures. aim of the present study was to evaluate the feasibility of using the plasma device, in our clinic, for tonsillectomy. The primary aim was to assess the 14-day post-operative recovery period in paediatric patients who underwent tonsillectomy using the plasma device compared to patients who received cold dissection with suture ligatures.

The study protocol was approved by the Ethics Committee of the S. Eugenio Hospital in rome, italy. The study group consisted of paediatric patients, age range 5-16 years old, who presented symptoms consistent with chronic tonsillitis.
After undergoing training to use the plasma device and actually performing, 10 cases were not included in the study, thereafter, the remaining patients were assigned to undergo tonsillectomy using either the plasma device or cold dissection with suture ligatures; patients were assigned to treatment as they were scheduled for surgery, alternating between assignment to one surgical approach and then the other through our first 21 plasma cases. The two surgical groups were statistically similar as far as concerns age and sex, and were similarly distributed in terms of tonsil size and prevalence of associated respiratory conditions (Table 1). none of the patients received concurrent adenoidectomy. The same surgical team performed all procedures between September and December 2004.

Cold dissection tonsillectomy was performed, as was standard for our clinic. using allis forceps, the tonsil was retracted medially, an incision was made at the anterior pillar near the upper pole of the tonsil which was then excised using a metal snare. Haemostasis was achieved by closing the wound using “slipknot” open ligatures with resorbable suture (Fig. 1). 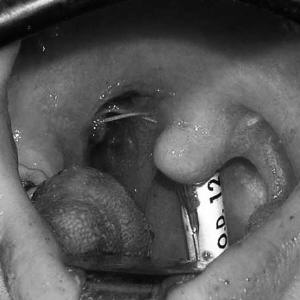 Plasma tonsillectomy was performed using the Evac 70 Wand (ArthroCare Corporation, Sunnyvale, CA, USA).
This device is designed for ablation and dissection of soft tissue and has integrated suction to facilitate removal of debris and variable coagulation settings to allow haemostasis.
With this technique, radiofrequency energy is used to excite the electrolytes in a conductive medium, such as saline solution, creating a precisely focused plasma. The energized particles in the plasma have sufficient energy to break molecular bonds 11-13, excising or dissolving soft tissue at relatively low temperatures (typically 40 °C to 70 °C). The same device was used to excise the tonsillar tissue and to perform haemostasis when required.
Using Allis forceps, the tonsil was retracted infero-medially and an incision was made at the anterior portion of the tonsil pillar. Care was taken to keep the dissection within the peritonsillar space and avoid penetrating the tonsil capsule. Once the tonsil plane was identified, the tip of the device was swept gently over the tonsillar tissue in a superior to inferior direction to remove it. Minimal pressure was applied, since this aided dissection of tissue and decreased the likelihood of excised tissue fragments clogging the device. While completing the tonsil excision, bleeding was controlled by switching to the coagulation setting and pressing the device tip directly onto the bleeder for 2-3 seconds. After achieving haemostasis, tonsil ablation was resumed. The fossa was completely cleared of tonsillar tissue while preserving the capsular plane and pillar (Fig. 2).

After surgery, all patients and parents were given a postoperative recovery diary to complete daily for 14 days; parents were asked to complete the form at home together with their children. The symptoms and pain parameters collected during the 14-day period included use of analgesics (paracetamol), diet type (e.g. liquid, solid) the child had followed that day, absence from school, and presence of pain, fever (> 37), and nausea. The parents recorded diary questions daily using a ‘yes’ or ‘no’ response. Pain intensity on the first day was graded using a 5-cm visual analogue scale, where ‘0’ represented ‘no pain’ and ‘5’ represented ‘maximum pain’. Parents were also asked to record occurrence of any bleeding episodes during this period and to call the hospital if the episode was worrisome.
During surgery, intra-operative bleeding was measured collecting blood by means of suction tube.

Surgery time ranged from 25-30 minutes for cold dissection and 30-35 minutes for the plasma device. When performing tonsillectomy using cold dissection, the procedure required 12-15 surgical instruments and three suture packs. In contrast, with the plasma device, 3 or 4 surgical instruments were used, including the Allis and/or Blumke forceps, pillar retractor, and Kelly forceps. Intra-operative bleeding, during the plasma procedure, tended to be half (~10 ml per case) that generally experienced using cold dissection (~20-25 ml per case).
No abnormal findings were observed, post-operatively, in any of the cases and physical examination findings were similar for both treatment groups. Patients in both groups reported some minor sputum bleeding when sneezing or coughing. No patient experienced a post-operative bleeding episode requiring clinical examination or readmission.
Children undergoing plasma tonsillectomy reported significantly less pain on the first post-operative day compared to children receiving cold dissection (Tables II, II); a pain score of ‘1’ or ‘0’ was reported by 14 (67%) plasma device-treated patients and by 3 (14%) cold patients submitted to dissection. The mean (± SD) number of pain days reported by children in the “plasma” group was 4.8 ± 1.5 days compared to 9.4 ± 1.2 days for children submitted to cold dissection (Fig. 3). The patients receiving plasma tonsillectomy also ceased use of analgesics sooner (Fig. 4), stopped liquid diet sooner (Fig. 5), and lost fewer school days (Fig. 6) than those submitted to cold dissection.
Tonsillectomy groups did not differ significantly as far as concerns the number of days with fever or number of days with nausea.
A significant linear relationship was observed between pain days and 1) use of analgesics (Pearson correlation = 0.422; p = 0.005), 2) school days lost (Pearson correlation = 0.650; p < 0.001), and 3) days on liquid diet (Pearson correlation = 0.811; p < 0.001).

Since completing the present study, the plasma device has been adopted for performing tonsillectomy in the majority of cases. However, performing tonsillectomy with this procedure should not be approached by simply using the same technique as would be followed when doing any other more conventional procedure; it should be considered a completely new surgical method. After appropriate training, plasma tonsillectomy represents an innovation that provides benefits for both the surgeon and patient, including the possibility both to excise tissue and to coagulate bleeding vessels with the same device and whilst, moreover, improving the quality of post-operative recovery compared to that following the cold dissection technique.